Transport Professionals for more than 35 Years

We are a future-oriented, owner managed, forwarding and logistics company which has been operating successfully in this demanding market for over than 35 years. One of our key actities is the supply of up- and downstream logistic services to car manufactureres in Eastern Europe. Besides these featured aktivities, which are ensuring a constant growth in all branches, we are developing individually customized logistic solutions as well as designing and performing special transports worldwide for our international clients.

1979 Spedition Weskamp GmbH founded at Siegen and Saarbrücken, offering German domestic and European road transport with own and chartered trucks

1993 Weskamp Hungary appointed as agent of TCU – TRANSCONTAINER UNIVERSAL (Bremen) in Hungary. Besides agency services, road haulage for containers in rail-road combined carriage to and from Hungary and Romania is provided.

1997 WH LOGISTIK Ltd. founded at Budapest as provider of rail-logistics

2021 Weskamp Transport GmbH continues with a new management
WH LOGISTIK Bt. closed after the cooperation with TCU had been abandoned 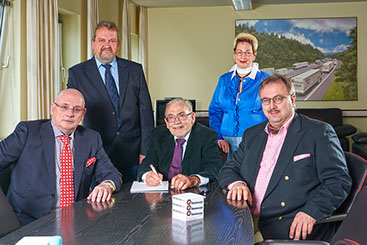